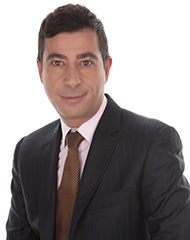 Born in 1970 in Athens, Greece, Constantine is a member of the Competition and the Agency & Distribution Practice Groups.

Constantine is a member of the Korinthos Bar Association since 1997 and entitled to argue cases before all Courts of Appeal and lower Courts.

At "Ballas, Pelecanos & Associates L.P.C.", Constantine advises the firm’s clients on all aspects of Greek and EU competition law with emphasis on the automotive sector.