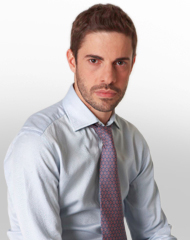 Nicholas Gregoriades is an Associate and participates in the IP, IT & CT Group, the Competition, Agency & Distribution Group and the Consumer Rights Group. He is also a member of the Special Sectors Group and the Litigation Group and serves as coordinator in the Contracts Group.

Nicholas is a member of the Athens Bar Association since 2000 and entitled to argue cases before all Courts of Appeal and lower Courts.

Nicholas is a published author. His book “Trademark Licensing Agreements and Restrictions of Competition” (Sakkoulas publishers, 2005) is one of many publications including case comments and articles in legal journals.

“Offshore Company with its Effective Seat in Greece - Commentary on Decision 2/2003 of the Supreme Court”, Chronicles of Private Law (ΧρΙΔ), 2003